Color is an important sensory component of red wine that has been shown to influence consumer preference.  Pyranoanthocyanins are anthocyanin derived red wine pigments, that were discovered relatively recently (the first example was isolated in 1996), and have gained attention owing to their contribution to wine color and relative stability compared with anthocyanins (Rentzsch et al. 2007a).  They are characterized by a new pyran ring at the 4 carbon and 5 hydroxyl positions on the anthocyanin due to the addition of compounds including hydroxycinnamates, fermentation products like pyruvate and acetaldehyde, vinylflavanols, and vitisins (Figure 1). Their color contribution is distinct from that of anthocyanins, with most compounds exhibiting a red-orange in color that is believed to contribute to the brick-red hue observed in aged wine.  One class (portisins) is blue in color.  Unlike anthocyanins, pyranoanthocyanin color is not bleached by bisulfite or by high wine pH (De Freitas and Mateus 2011).  Notable examples include vitisin A, vitisin B, and pinotin A, which have pyruvate, acetaldehyde, and vinyl phenol precursors, respectively. 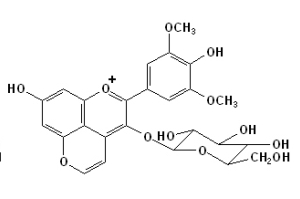 Morata, A., M. Gomez-Cordoves, B. Colomo, J. Suarez.  2003.  Pyruvic acid and acetaldehyde production by different strains of Saccharomyces cerevisiae: relationship with vitisin A and B formation in red wines.  J. Agric. Food Chem. 51:7402-7409.

Rentzsch, M., M. Schwarz, P. Winterhalter, D. Blanco-Vega, and I. Hermosin-Gutierrez.  2010.  Survey on the content of Vitisin A and hydroxylphenyl- proanthocyanins in Tempranillo wines. Food chemistry. 119:1426-1434.