Oak lactones are key to the aroma imparted by oak barrels. The aroma of bourbon whiskey is dominated by oak lactones and vanillin. Sean Eridon, 2015

Use of oak is the only method of flavor addition to wine allowed, and can be controlled through many different parameters making it an invaluable tool for a skilled and experienced winemaker.  Compounds of note which are imparted by Oak include ellagitanins, phenolic aldehydes such as vanillin, volatile phenols such as eugenol, and lactones (Chira et al, 2013).  The major contributor to extractable oak volatile compounds is beta-methyl-gamma-octalactones, which is found as both cis and trans isomers,  their presence in oak as well as spirits has led to the colloquial terms of oak or whiskey lactones.  Analysis of these compounds is generally achieved through Gas Chromatography, though analysis of precursors has been achieved through HPLC (Hayasaka et al. 2007).  The Cis isomer is the more prevalent form found in wine and has a lower sensory threshold of 0.074mg/L  in red wine compared to 0.32 mg/L for the trans isomer(Abbot et al, 1995).  The two isomers have similar but different aromas associated with them, both being characterized by coconut aroma when pure.  Other volatile aroma compounds can modify the impact of is b-methyl-g-octalactones.  In wine they have been described as smelling of vanilla and caramel, as well as woody, spicy,  and sweet (Reazin et al, 1981)(Chira et al, 2013).

Figure 1: Cis and trans isomers of beta-methyl-gamma-octalactone (Left and Right respectively). (Copied from wikipedia under the GNU Free Documentation License) 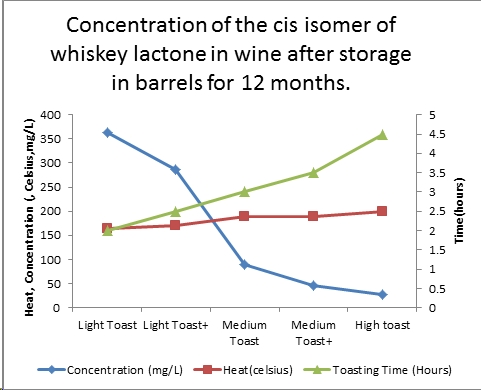 Figure 2: The effect of increased toasting on the concentration of the cis isomer of whiskey lactone in wine after storage in barrels for 12 months. Data from Chira et al. 2013.

Abbott, N. Puech, J.-L. 1995. Determination of the Aroma Threshold of the cis and trans Racemic Forms of β-Methyl-γ-Octalactone by Gas Chromatography-Sniffing Analysis. Am. J. Enol. Vitic. 46:292-294.